That lamb roast was huge! I like meals like that. They give you leftovers to play with for the next few days. Not having to make a meal from scratch is always a bonus!

It also means that if you are in the mood you have more time to experiment.

First cut the potatoes. I mixed irish potatoes and sweet potatoes. Wash, peel, cut to bite sized pieces and cook till just tender but not falling apart tender. Don’t forget to salt them. While the potatoes are cooking you can prepare the other ingredients:

I thought it would look nice to serve the salad inside “red pepper cup!” So I needed to cook it but keep it whole, roasting in the oven was the best option. Sprinkled it with a little olive oil and salt and placed it in the oven. I didn’t note the temperature I used, probably 180°C or 200°C. I also didn’t set a timer. I’d say long enough to char a little but not too long that it becomes mush. Use the top rack in the oven.

Once the potatoes are cooked, drain and set aide to cool. While they cool you can start on the dressing: 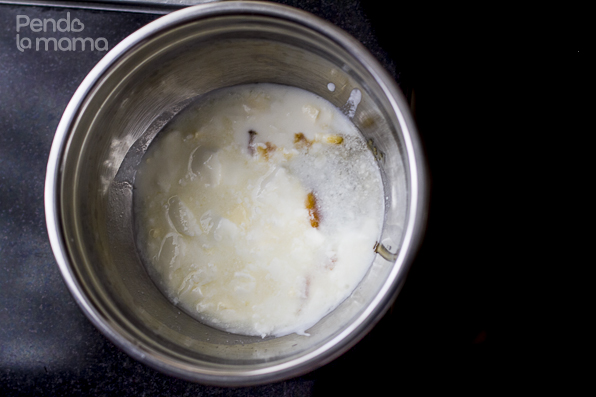 Start with:
150g sour cream
2 tablespoons honey
juice of half a large lemon

Mix, then add the following
a pinch of salt
couple of dashes of pepper
1/4 cup apple cider vinegar
Mix again

The potatoes should have cooled off enough by now.

When I make potato salads I prefer not to add dressing to everything. I only mix the dressing with what will be eaten immediately.

Served it with the leftover lamb roast. It was delicious. But he left the pepper on the plate!!

Yeah, but you didn’t even taste it at all!!

Well it’s too much, doesn’t look appetising, should have been a smaller piece.

Or maybe I should have chopped it up into the salad?

So whats the rating?

it was too tangy, a bit too much lemon. But I ate it all, that says something.

Like he said, he ate it all. What more could a woman ask for!

I tend to like sharp tangy flavours, if you’re not a fan I suggest reducing the apple cider vinegar.