There was some chicken and creamy sauce left over and hubby wanted me to pack him lunch, he wasn’t going to have a place to warm it, so rice didn’t seem like a good idea. But a sandwich would do great!

In addition to the chicken, I added the following layers of other ingredients (first I buttered the bread lightly):

Cheese
The creamy sauce (a light spread)
A few onion rings
Spinach leaves (palak). Then a layer of the chicken strips. And a layer of sliced tomatoes
Another layer of spinach

Done! Cover with the second slice of bread and bag it! Or just eat it if it’s not for later! (^_^)

I haven’t eaten it yet. I will eat it right now.

What?! Why not? What did you have for lunch? [I expected him to say a lunch meeting came up or something,…]

I had some chips! But I’m going to eat it right now. Would you drive while I eat?… No! Scratch that! I’ll just eat it first, then we can go. 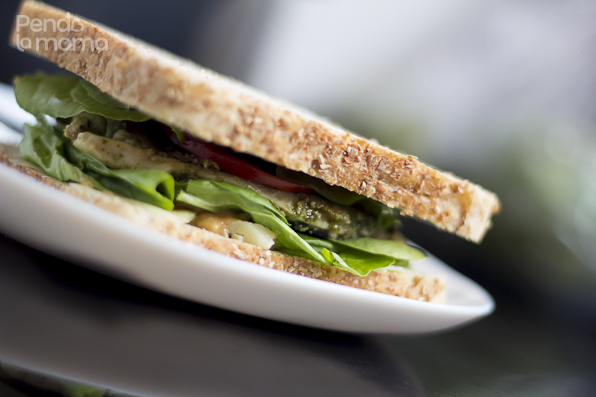 So we sat in the parking lot while he ate the sandwich. He took some very enthusiastic bites! Wasn’t sure if he was enjoying it or rushing so we could get out of there and head home! After 5 min,..